This content has been marked as discussing an ADVANCED topic!
For the sake of this tutorial trail only this diagram has more snippet commentary than usually recommended for a Package Diagram. Normally these would only be included in dedicated BDD focus diagrams. 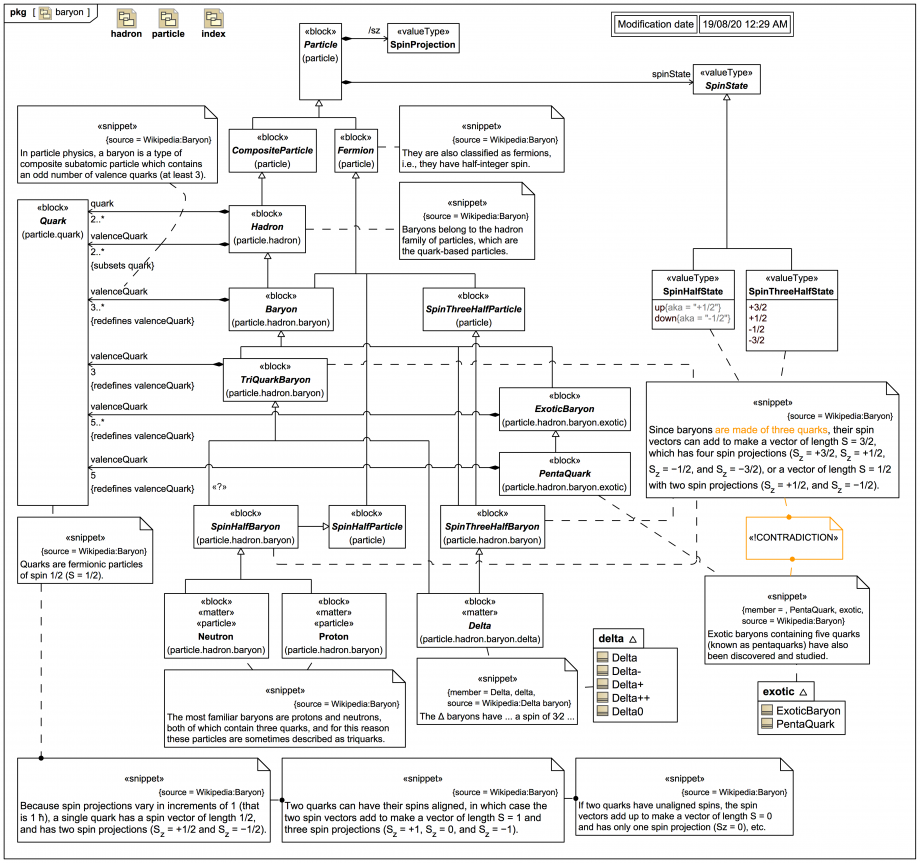 Good ol' Wikipedia is a bit inconsistent here. We are told that:
Wikipedia: 'In particle physics, a baryon is a type of composite subatomic particle which contains an odd number of valence quarks (at least 3).'
Note the bit about '(at least 3)'. On the same page it also says:
Wikipedia: 'Since baryons are made of three quarks [DISPUTED], their spin vectors can add to make a vector of length S = 3/2, which has four spin projections (Sz = +3/2, Sz = +1/2, Sz = −1/2, and Sz = −3/2), or a vector of length S = 1/2 with two spin projections ...'
This also contradicts the discussions on exotic bayrons such as pentaquarks (unless one somehow interprets 'exotic baryons' as not being 'baryons'):
Wikipedia: 'Exotic baryons containing five quarks (known as pentaquarks) have also been discovered and studied.'
It would be nice to be able to indicate that the text extract of one Snippet element appears to contradict another. This highlights a shortcoming of the ElementGroup:
One limit of the SysML ElementGroup for Parsing Analysis is that it is not fully relatable.

One workaround is to use an editorial comment with the stereotype keyword «!CONTRADICTON» (where the «!...» is a Webel convention), with "anchors" to the two snippets that seems to contradict each other.

From the point of view of representing taxonomies and hierarchies in SysML baryons are a very interesting case study. Consider, for example, the Delta (of which there are 4 concrete kinds). On the one hand we can say it is a TriQuarkBaryon (in the sense used in the SysML model here, not just in the popular sense of neutrons and protons being "triquarks"). The Delta is also a SpinThreeHalfBaryon, which in turn is a SpinThreeHalfParticle (which knows about the SpinThreeHalfState enumeration value type).

Now consider the PentaQuark. Wikipedia as of 2020 is still a bit all over the place concerning whether the existence of pentaquarks has been confirmed, but according to CERN as of about 2015 they definitely exist.

Can a PentaQuark be a spin-1/2 particle? No cheating now, we are playing the "Wikipedia as source" SysML Parsing Analysis game, not the "pluck the knowledge out of your head" game. Without an authoritative snippet (text extract) to answer it the model here deliberately does not make any unwarranted assumptions about it yet (but does safely redefine the multiplicity of valanceQuark to be [5] for PentaQuark).

You may be asking whether this growing, exploding zoo of baryons could not all be better handled using some degree of parametrisation. After all, if increasingly exotic baryons exist do we really want SpinFiveHalfBaryon, SpinSevenHalfBaryon and so on?

Certainly SpinHalfParticle and SpinThreeHalfParticle have such specific physics associated with them they are definitely worth having and inheriting from.

Another thing to consider is this; having a concrete SysML block for each kind of known or predicted baryon (and there are lots of them) gives you a place to document that baryon - including specific experimental data about each one.

(Apologies if your favourite Lamda, Sigma, Xi, or other baryon does not appear here.)