This tutorial trail is part of an evolving series of tutorials on the  Webel Parsing Analysis recipe for SysML®, this time with a focus on modelling taxonomies, using particle/field physics as an interesting case study.

First, a DISCLAIMER from your guide Dr Darren:

Although I was trained as a physicist, and even worked for some time on particle accelerators (the machines, not the particles they study) - I am relatively stupid in matters of advanced particle physics. This is NOT primarily a tutorial on particle physics (although you might learn a bit about it).

If you do want to learn more about particle physics and modern quantum field interpretations of "particles", these podcast series from Audible are recommended:

This trail is, however, a tutorial on exactly how the  Webel Parsing Analysis recipe for SysML® works, and is going to be developed live, right here on this site, to show how the method works with diagrams evolving from the very start.

But first, a quick word on Web Ontology Language (OWL). There have been some very nice attempts at capturing particles physics models in OWL, which has a far more dynamic concept of taxonomies, ontologies, and classes than UML or SysML. For example, in OWL one could compute using an inference engine whether something "is a" lepton, whereas in SysML one typically asserts that something is using a Generalization to an abstract base Block (although you can do nice SysML Parametrics computations against value properties used for categorising particles). OWL is very strong at that aspect, but SysML pretty well completely walks all over OWL for just about everything else. Want to do a port-based engineering model with flows in OWL? I didn't think so. Requirements Engineering in OWL? Nope. OWL is a wonderful technology for its intended purpose, but it is not the right technology for everything. "Horses for courses".

It is assumed here that you already have a basic understanding of SysML. If you get stuck, this meta-tutorial is your friend (or attend the Webel course): 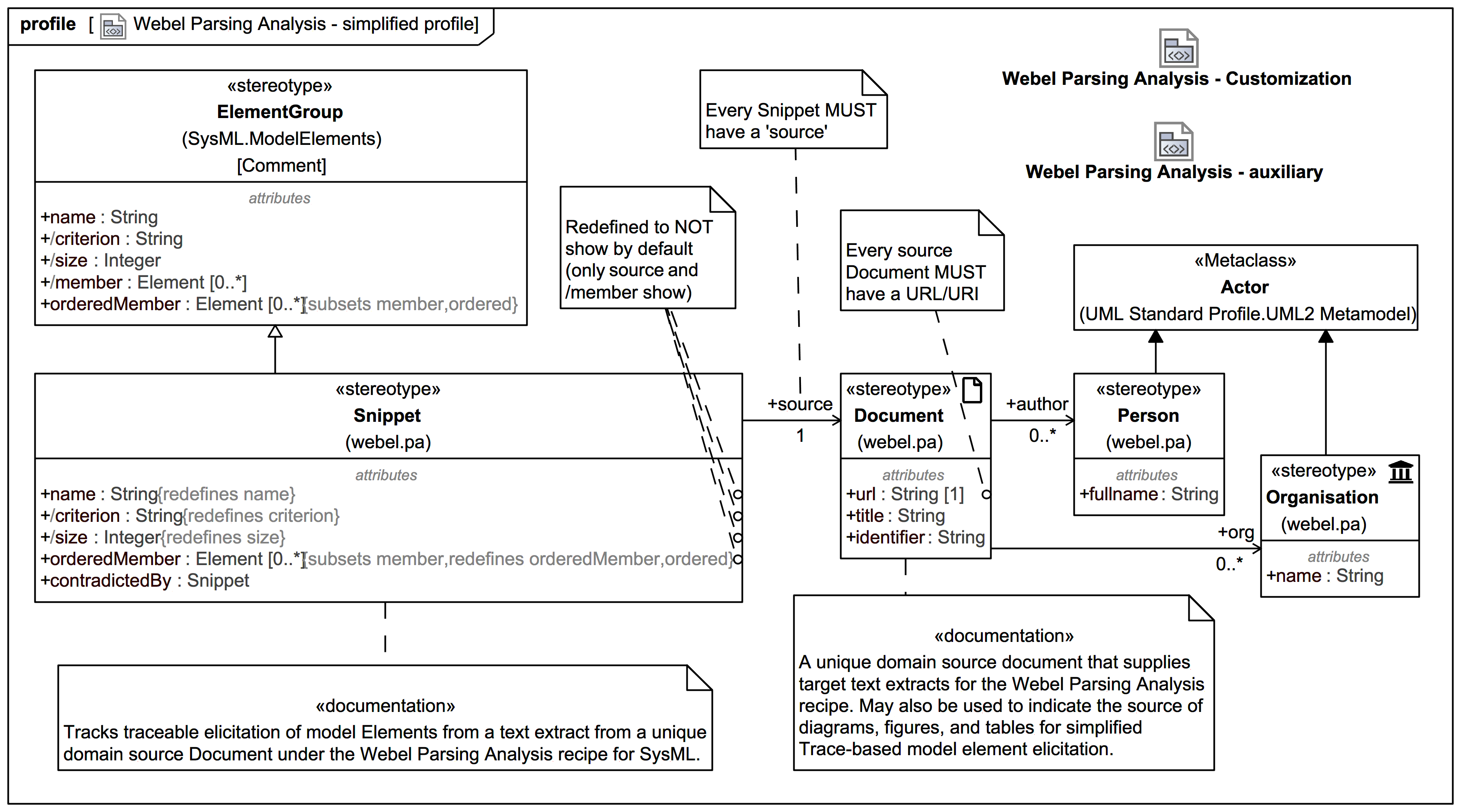 Webel Parsing Analysis for SysML - simplified profile
It will help if you have also already viewed the following mini trail section and especially these two slides from that mini trail, although we'll be reviewing most of these concepts as we go along:

18:01: Logical grouping with the ElementGroup extension of Comment in SysMLv1.x

SysMLv1.x: Extending the ElementGroup for the Webel Parsing Analysis recipe (a quick look)

We are going to more-or-less follow the Webel Best Practice items and the policies and tips listed under The Webel Parsing Analysis recipe for SysML, and we'll be linking to those also as we go along. I invite you to keep the following two policy items in mind throughout:

Webel Parsing Analysis «pa» diagrams are NOT intended as final presentation diagrams! They serve merely to traceably elicit model elements, which may then be shown in other (typically much tidier) presentation diagrams elsewhere.
Webel «pa» Parsing Analysis Diagrams (PADs) are "scratchpads" used to elicit model elements traceably from text Snippets (extracts from source Documents). While BDDs are a good initial choice, most types of SysML diagram can be used as a «pa» diagram.

This means also that (although some effort has been made to tidy up diagrams here as they are uploaded) in the underlying model the Parsing Analysis diagrams indicated with the stereotype keyword «pa» will change as the model evolves elsewhere. This does not matter at all!

The Parsing Analysis diagrams do their job once - namely traceable elicitation of model elements - and are then only kept as a reference! The elicited model elements are then used elsewhere in the final model.

Therefore, the diagrams as uploaded early in this trail may no longer look that way in the tool's project model later. That is the whole point of doing this trail live! You are going to see exactly how such a project evolves. Therefore the slide diagrams are also mostly clearly time-stamped, so you can tell I am not "cheating" too often by going back.

Finally, in Parsing Analysis, we always start with a source, and for this trail that source is going to be Wikipedia, which - while not perfect - does almost certainly "know" more about particle physics than most of us. On a real project, you would use authoritative domain source documents. The  Webel Parsing Analysis recipe for SysML® has a formal way of tracking text quoted from such sources using tagged values metadata on stereotyped elements.

In Webel Parsing Analysis tutorials, Wikipedia pages are often used as a placeholder sources to represent authoritative domain source documents from which text extract "snippets" are sourced, and from which SysML model elements are traceably elicited.

So we can see where we are headed, we are going to jump ahead a bit to see first what a Parsing Analysis "scratchpad" diagram looks like. Then we'll go back later and see how the project is set up.

Calculate whether a specific particle is a lepton using SysML parametrics 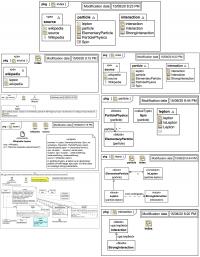 Focus BDD for the Lepton block 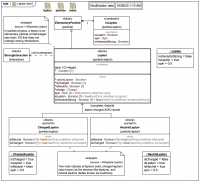 Focus BDD for the Positronium block 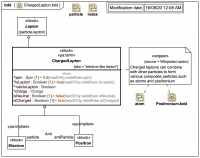 The lepton Package Diagram so far 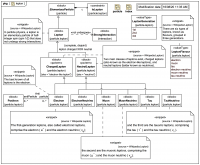 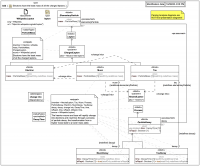 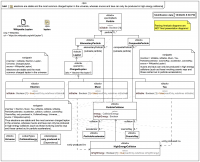 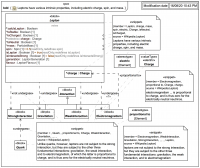 Mass and charge of electron and positron 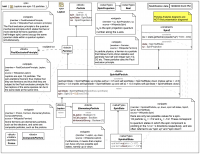 Neutrons and protons are spin-1/2 fermions and baryons 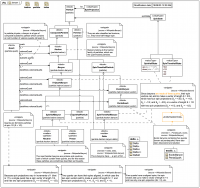 The minimum on mesons From hadron to meson Package Diagrams and focus BDDs 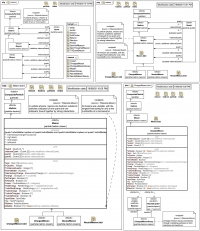 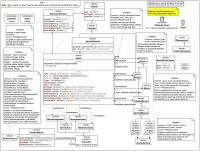 There are six types of quarks (and six antiquarks)

The quark Package Diagram so far 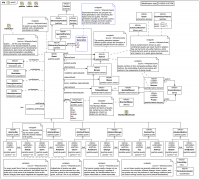 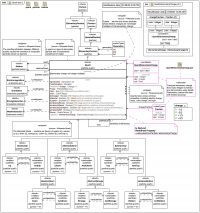 Protons are spin-1/2 fermions and are composed of three valence quarks, making them baryons 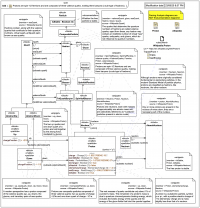 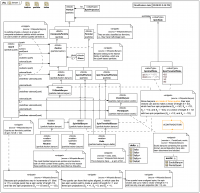 A focus BDD for the AtomicNucleus block The neutron is classified as a hadron, because it is a composite particle made of quarks.