There are six types of quarks (and six antiquarks)

This content has been marked as discussing an ADVANCED topic!
This very complex diagram is at the limit of what should be attempted in one Parsing Analysis Diagram; typically one would have separate diagrams for separate snippets or for smaller groups of snippets, but many snippets are included together here just for the convenience of this trail. Please also note again that:
Webel Parsing Analysis «pa» diagrams are NOT intended as final presentation diagrams! They serve merely to traceably elicit model elements, which may then be shown in other (typically much tidier) presentation diagrams elsewhere.
And note that is such complex diagrams this tip can help:
Webel Parsing Analysis: If the dashed-line "anchors" from your «snippet» ElementGroup symbols to elicited elements make a «pa» Parsing Analysis Diagram (PAD) too hard to read, try making them light grey using symbol properties.
The main target snippet is:
Wikipedia: 'There are six types, known as flavors, of quarks: up, down, strange, charm, bottom, and top.' 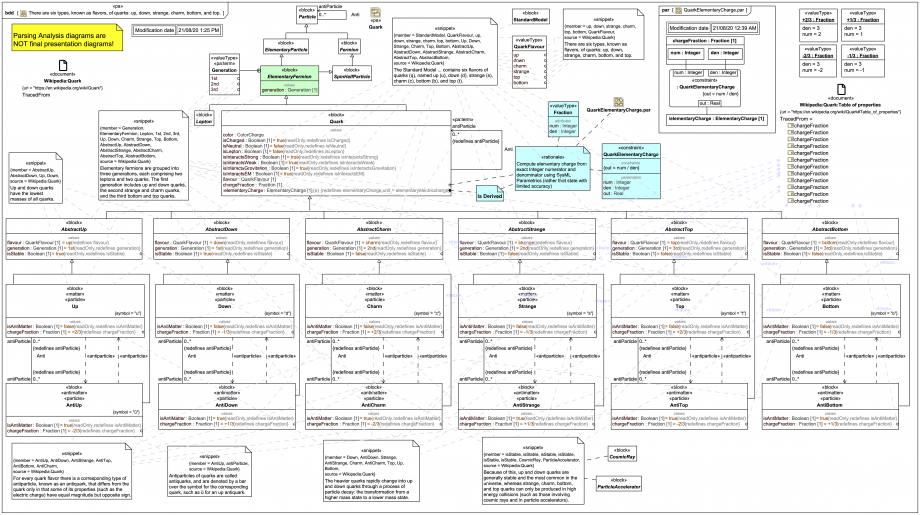 Sometimes Wikipedia uses the spelling 'flavor' and sometimes 'flavour'; in this trail 'flavour' is used throughout.

Before addressing the concrete quark types, the following snippet provides some more specific information about what was until now the lepton-specific ValueType LeptonGeneration:
Wikipedia: 'Elementary fermions are grouped into three generations, each comprising two leptons and two quarks. The first generation includes up and down quarks, the second strange and charm quarks, and the third bottom and top quarks.'

It seems that this concept of 'generation' in fact applies equally to quarks and leptons, both of which are elementary particles, spin-1/2 particles, and fermions. A new intermediate abstraction ElementaryFermion has been introduced that extends SpinHalfParticle (which is always a Fermion) and ElementaryParticle. We'll see later how this has now also been added to the relevant lepton and fermion diagrams.

Concerning including data on each elementaryCharge (which is ultimately a SysML Real) a tool issue has to be addressed. For quarks these are always fractions, but (unlike with symbolic alegbra) one can't enter fractions like 2/3 into a Real in the MagicDraw SysML Plugin or Cameo Systems Modeler® tools. Rather than repeating numbers like '0.66666666 ... ' everywhere, it is calculated using SysML Parametrics.

A chargeFraction:Fraction is used, where Fraction is a structured ValueType with Integer attributes 'num' (for numerator) and 'den' (for denominator). The /elementaryCharge is redefined as derived, and bound via a usage of the ConstraintBlock QuarkElementaryCharge to the fractional parts, with the constraint equation out = num/den.

The charge fractions are specified using InstanceSpecifications with the slightly HACKED yet effective names '+2/3', '-1/3', '-2/3', '+1/3' (the names play no roles in the actual calculations).

For example, when the calculation is run in Cameo Systems Modeler® or Cameo Simulation Toolkit® for charge fraction +2/3 and with the built-in maths engine (which handles the conversion from Integer to a floating point type automatically), the result is 0.6666666666666666. That might not be quite accurate enough for professional particle physics calculations (we don't want protons with charge 0.9999999...), but note one can delegate to many external maths engines such as Mathematica.

The next "matter" (oops, that pun again) is how to handle the antiparticles. The language used throughout the Wikipedia articles on particles is a bit inconsistent concerning this. This snippet is clear:

Wikipedia: 'For every quark flavor there is a corresponding type of antiparticle, known as an antiquark, that differs from the quark only in that some of its properties (such as the electric charge) have equal magnitude but opposite sign.'
However in some places Wikipedia refers to 'antiquarks' (and 'antileptons') as being the same as antiparticles (namely opposites of any particle of any kind, "ordinary" matter or antimatter) and in some places it refers to 'antiquarks' as being specifically the antimatter variants:
Wikipedia: 'Antiparticles of quarks are called antiquarks, and are denoted by a bar over the symbol for the corresponding quark, such as ū for an up antiquark.'

In this SysML model this is handled consistently (as done before before for leptons) by using intermediate abstractions that encapsulate aspects common to both the «matter» and «antimatter» variants within each flavour. For example, the block AbstractUp has redefined value properties flavour = up, generation = 1st, and isStable = true. The specific «matter» «particle» Up has isAntiMatter = false and chargeFraction = +2/3, whereas the counterpart «antimatter» «particle» AntiUp has isAntiMatter = true and chargeFraction = -2/3.

As earlier in the trail, the symmetric anti-particle relationship is handled in two separate ways. There is an «antiparticle» Dependency from each «matter» particle block to its corresponding «antimatter» block, and vice-versa; and there is an Association Anti with symmetrically redefined property ends antiParticle. One need not, of course, show all of this verbose information on every final presentation diagram.

This minor tool limitation means the symbols could not be entered for most of the «antimatter» variants:

This slide diagram also illustrates a nice short-cut version of Parsing Analysis you can use when a document has lots of data in tables. There is a «document» Wikipedia:Quark:Table of properties, which refers to a link within the page. A SysML Trace has been drawn (shown in very faint purple) from each of the redefined chargeFraction value properties to indicate that the value has not just been plucked out of the air, and is traceable to a domain source document. You can then list the computed 'tracedFrom' elements on the source «document» symbol.

Webel Parsing Analysis: You do not need to map every word of every snippet to the UML/SysML model! Extract only the information required for your domain modelling task to add incremental benefit.

So these snippets have not yet been treated in detail:

Interpreting 'up and down quarks are generally stable' by redefining isStable = true in AbstractUp and AbstractDown may be a bit dangerous, but will have to do for now until further sourced information comes along.

If you are a physicist following this, you may have noticed that there are many other quantum numbers and properties of quarks that don't appear here yet. There is no obligation to do everything at once. When using the  Webel Parsing Analysis recipe for SysML® we proceed step-by-step collecting information, subsets of which can then be exposed in dedicated presentation diagrams according to the intended audience.