Everyone loves a telescope! The audience for this tutorial trail is anybody from any engineering, science, information technology, or other background who wants to learn how to start modelling real systems using the  Webel Parsing Analysis recipe for SysML® for creating models from the text of domain source documents.
Your guide for this tutorial is Dr Darren of Webel IT Australia, who trained as a physicist and has studied and worked on radio telescopes (including modelling them in UML/SysML), has done some SysML modelling for the GMTIFS integral-field spectrograph instrument for the Giant Magellan Telescope (GMT), and has held SysML training for astronomical optics and instrumentation specialists.

I enjoyed playing with some astrophotography as a teenager. A friend at school had an 8-inch Schmidt-Cassegrain reflector. Later, in 1986, together with another friend, we photographed Halley's comet from a farm in the bush in Australia and only just lived to tell the tale. We all survived a really bad car crash on our return; it was worth it to see that faint smudge of Halley's comet on film.

This tutorial trail is part of an evolving series of tutorials on the  Webel Parsing Analysis recipe for SysML®, this time with a focus on modelling structures using SysML Blocks, Block inheritance hierarchies (to capture different kinds of telescopes), and ItemFlows and Ports to capture light flow models for various optical telescopes.

For the first trail section, we'll only be creating very simple models of some basic amateur-level telescopes, but eventually we'll build up to be able to model some aspects of the Giant Magellan Telescope (GMT), which uses an aplanatic Gregorian reflector optical design with multi-segment primary and secondary mirrors. We'll know whether the abstractions, inheritance hierarchies, and composition hierarchies have been chosen well if the option of scopes with complex mirror assemblies with multiple segments has not been inadvertently excluded.

This trail is a tutorial on exactly how the  Webel Parsing Analysis recipe for SysML® works, and it is going to be developed live, right here on this site, to show how the method works with diagrams evolving from the very start.

The technique shown here is very much as I have used on many substantial real-world projects, except that we are going to take a few short-cuts concerning assemblies:

In professional applications of the Webel Parsing Analysis recipe for SysML, a robust reusable profile for «part»/«assembly»/«leaf» components is used, along with stereotypes keywords like «assembles» for indicating physical composition hierarchies.

We'll instead be using a simplified assembly model here at first so the trail model is self-contained.

It is assumed here that you already have a basic understanding of SysML. If you get stuck, the following meta-tutorial is your friend (or attend the Webel course): Webel Parsing Analysis for SysML - simplified profile
It will help if you have also already viewed the following mini trail section and especially these two slides from that mini trail, although we'll be reviewing most of these concepts as we go along:

18:01: Logical grouping with the ElementGroup extension of Comment in SysMLv1.x

SysMLv1.x: Extending the ElementGroup for the Webel Parsing Analysis recipe (a quick look)

We are going to more-or-less follow the Webel Best Practice items and the policies and tips listed under The Webel Parsing Analysis recipe for SysML, and we'll be linking to those also as we go along. I invite you to keep the following two policy items in mind throughout:
Webel Parsing Analysis «pa» diagrams are NOT intended as final presentation diagrams! They serve merely to traceably elicit model elements, which may then be shown in other (typically much tidier) presentation diagrams elsewhere.
Webel «pa» Parsing Analysis Diagrams (PADs) are "scratchpads" used to elicit model elements traceably from text Snippets (extracts from source Documents). While BDDs are a good initial choice, most types of SysML diagram can be used as a «pa» diagram.

This means also that (although some effort has been made to tidy up diagrams here as they are uploaded) in the underlying model the Parsing Analysis diagrams indicated with the stereotype keyword «pa» will change as the model evolves elsewhere. This does not matter at all!

Webel Parsing Analysis diagrams do their job once - namely traceable elicitation of model elements - and are then only kept as a reference! The elicited model elements are then used elsewhere in the final model.

Therefore, the diagrams as uploaded early in this trail may no longer look that way in the tool's project model later. That is the whole point of doing this trail live! You are going to see exactly how such a project evolves. Therefore the slide diagrams are also mostly clearly time-stamped, so you can tell I am not "cheating" too often by going back.

Finally, in Parsing Analysis, we always start with a source, and for this trail that source is going to be Wikipedia, which does "know" quite a lot about basic telescopes (even if it is not perfect). On a real project, you would use authoritative domain source documents. The  Webel Parsing Analysis recipe for SysML® has a formal way of tracking text quoted from such sources using tagged values metadata on stereotyped elements.

In Webel Parsing Analysis tutorials, Wikipedia pages are often used as a placeholder sources to represent authoritative domain source documents from which text extract "snippets" are sourced, and from which SysML model elements are traceably elicited.

So we can see where we are headed, we are going to jump ahead a bit first to see what a Parsing Analysis "scratchpad" diagram looks like. Then we'll go back later and see how the project is set up. 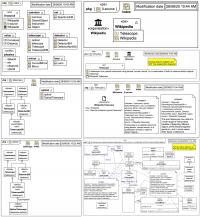 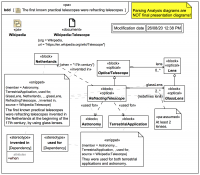 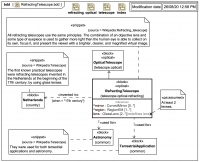 The reflecting telescope uses mirrors to collect and focus light 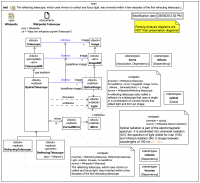 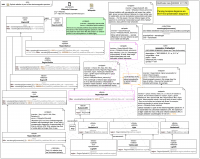 Calculate wavelengths from frequencies and compare EM regions in a table 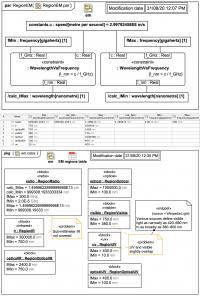 An eyepiece is a type of lens that is attached to a variety of optical devices such as telescopes and microscopes. 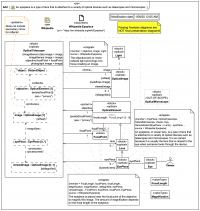 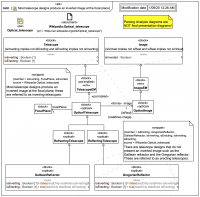 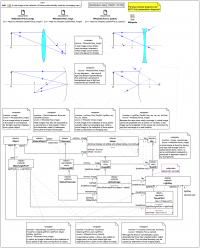 The basic scheme of an optical telescope: Keplerian refractor 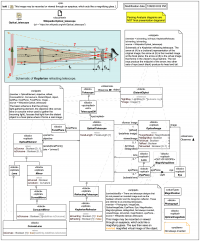 IBD of a SimpleOpticalTelescope in context with some relationships 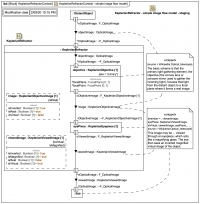 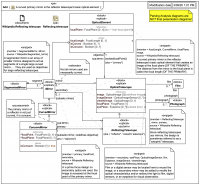 The Gregorian telescope employs a concave secondary mirror that reflects the image back through a hole in the primary mirror. 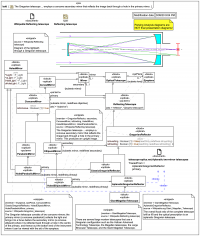 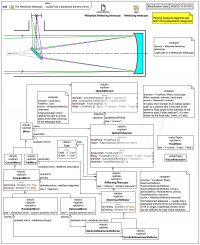 Comparison of reflecting telescopes so far 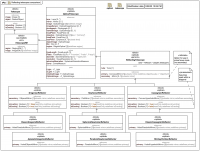 Gregorian primary and secondary assembly variations within the tube 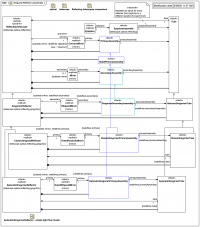 Overview of major Package Diagrams for the optical telescopes model

Learn SysML for MBSE with the Webel IT Australia live online or onsite course!

Please email or phone Webel IT Australia on +61 405 029 008 or +61 (2) 9386 0090 to arrange on-site, off-site, or live remote web training seminars and workshops
Course: Model-based systems engineering with the OMG's Systems Modeling Language® and the SysML Plugin for MagicDraw® and Cameo™ (CATIA Magic) 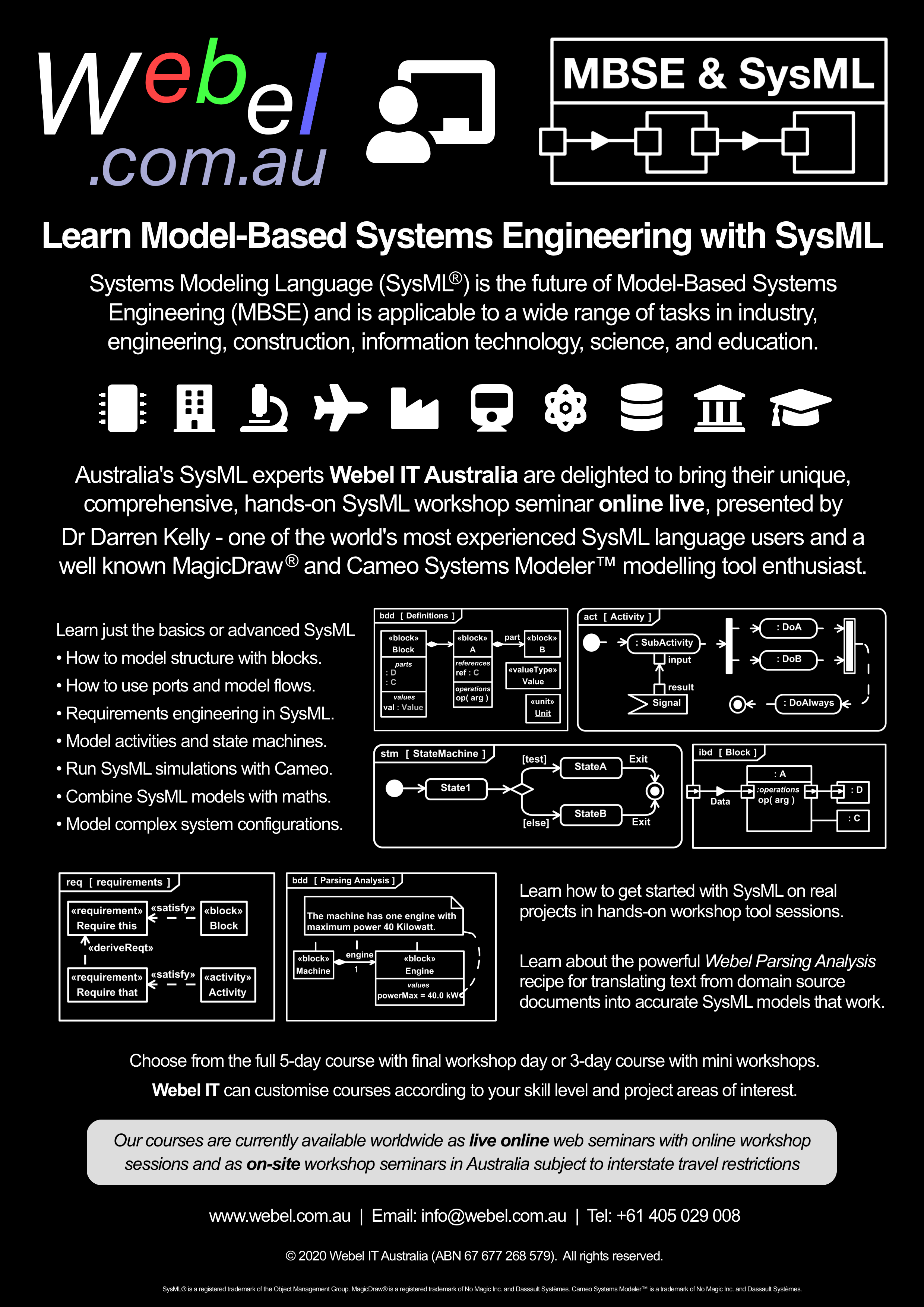